By maintaining an active acquisition program, the AMHP collection continues to grow with frequent additions of hand printed textiles along with relevant objects and photographs. The extensive Anokhi Archives also provides a rich repository of clothing and home furnishings dating from the early 1970s to present. The museum focuses on contemporary cloth ranging from innovative designs created by talented artisans, to traditional outfits worn by fewer and fewer in certain regions today. A focused selection of historic textiles provides a context for further understanding block printing.

Walk around the galleries and explore different features of the craft. Although the AMHP collection is currently not accessible online, we are in the process of making it available, in the hope of sharing our archives soon. 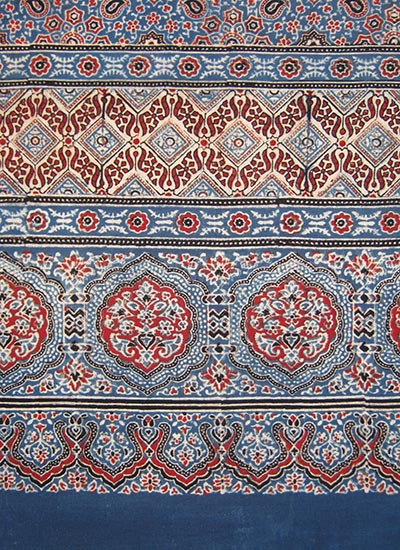 Modern cloth is better understood after looking at historic precedents. Several AMHP galleries reveal the wide-ranging beauty and creativity of traditional block prints. From the village dress found in Balotra, Rajasthan, to the sophisticated Ajrakh patterns of Gujarat, where this cloth can still be glimpsed on people in the dusty fields and cobbled lanes. 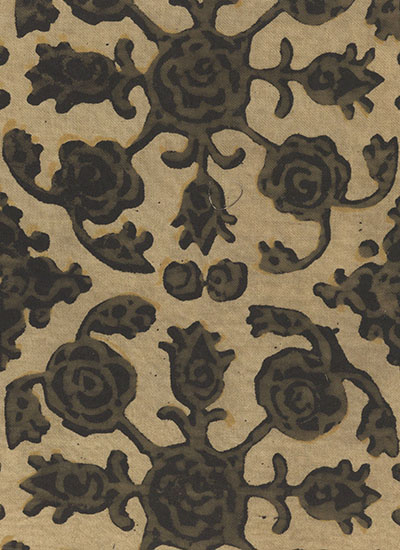 Designed for the museum opening in 2005, this display is now a beloved gallery on view by popular demand. Illuminating the creative process, this display exemplifies a cross cultural collaboration between two designers – one from India, one from abroad — who re-envisioned the lavish costumes of Russian avant-garde designer, Leon Bakst (1866-1924).

Bakst (1866 – 1924) was a Belarusian painter and stage designer who travelled from Europe to Morocco, absorbing the colours and patterns of cloth.    Fame arrived by virtue of his extraordinary set designs, but culminated in his work with Diaghilev and the founding of the Russian Ballet.  As Artistic Director, his stage designs brought international fame while his colourful exotic costumes, drawn from Orientalism and motifs from the ancient world, caused a sensation that prompted new fashions in dress and interior decoration.

Bakst enters the lexicon of Indian crafts as these designers compliment his avant-garde style using carved blocks, contemporary pattern and natural colour – a grand tribute to the Russian visionary. 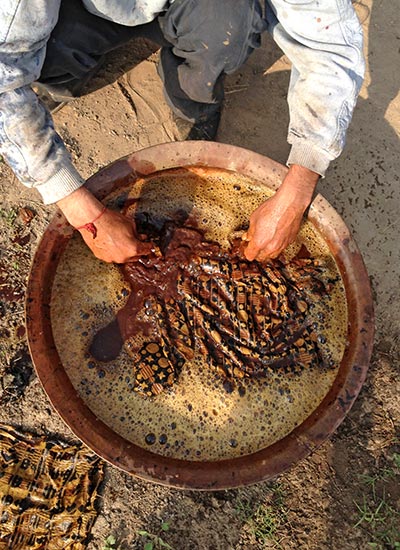 Process: Following a Vest from Beginning to End

Have you ever wondered exactly how the printing process works? Well you can follow the 11 stages that detail exactly how a plain white cotton vest turns into an elaborate striped waistcoat — from its humble beginnings, to early stamping and colouring, until finally becoming a stylish printed 6-colour garment. The specificity of this gallery highlights the labour intensity and extreme skill needed for practitioners of this craft. 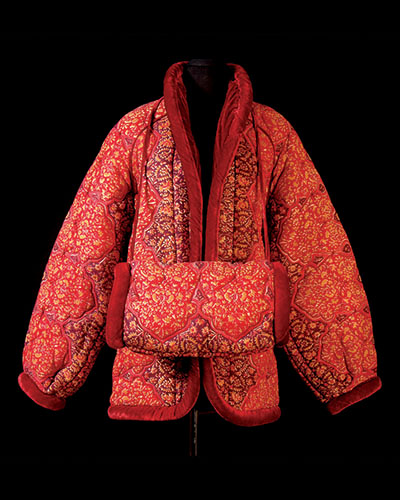 Focus on the Collection

This ongoing series provides an in-depth look into selections from the Anokhi Archives.

Coats and Jackets highlighted the historic importance of outwear to protect against the biting cold of a Rajasthani winter. Quilted garments shielded people for centuries   and the modern interpretations from the 1980 through 1990s exemplified the fusion of international trends with traditional Indian handiwork. 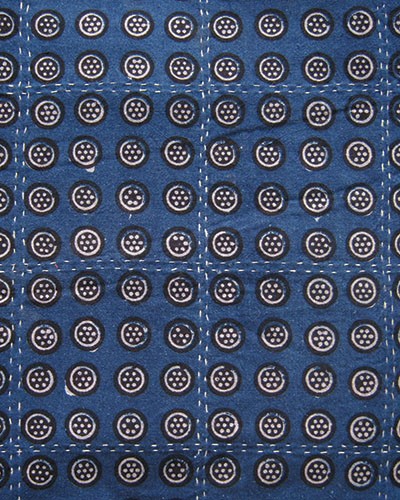 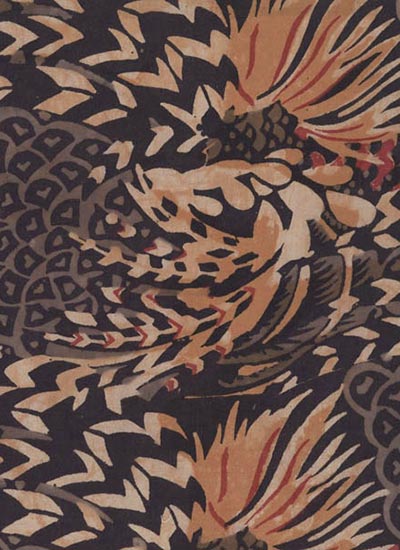 Focus on the Collection

An ongoing series that takes an in-depth look into selections from the Anokhi repertoire.

AMHP displayed fascinating examples of outerwear in Coats and Jackets, an exhibition of highlighting the age-old importance of garments that protect against the biting cold of a Rajasthani winter. These modern interpretations from the 80s and 90s exemplified the fusion of international trends with Indian handiwork. 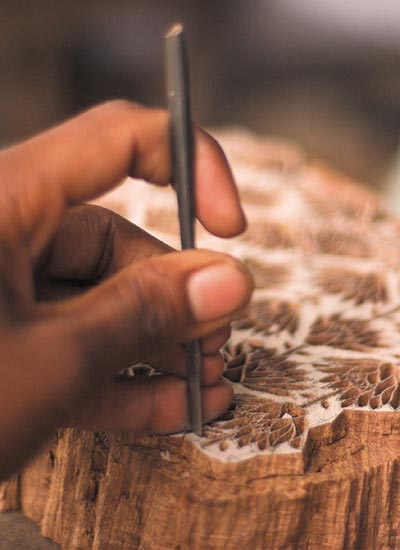 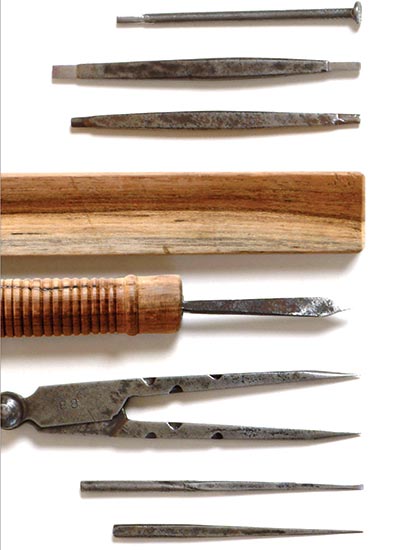 Tools of the Trade

The museum collection also includes fine examples of the equipment required by the block printing community. From  wooden and brass blocks to tiny chisels and hand-bow drills, AMHP displays a variety of handmade tools. Photographs and other ephemera related to the craft may also be seen in the galleries. 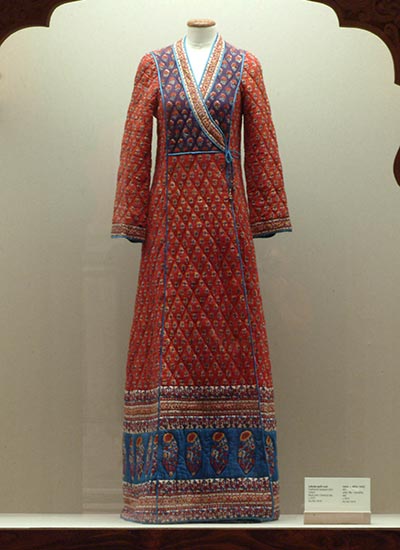 The current exhibition, A Bohemian Wardrobe is drawn from the Anokhi Archives. Beginning in 1970 with the advent of the Anokhi label, each piece of clothing and home furnishings has been meticulously stored in a vast archive used for artistic inspiration and research. The archives provide a basis for thematic exhibtions, often incorprating other lenders. The collection also gives a contemporary context for exhibitions of tradtional block printed textiles, and exemplifys how modern designers renvision the past for inspiration.